REFLECTIONS ON WORKING WITH POLYAMORY

Below, I’m going to present a vignette and case conception around concepts of working with a client who came to therapy and used the space to explore polyamory.

The information about the client has been modified from information from three individual clients who came to me for counselling. I’ll be referring to a pseudonym (“Gianni”) throughout.

Introduction
Reflective exercise allows the therapist to look inward at the structural and philosophical underpinnings of their own practice – how their place in the world influences their perspective, and subsequently their output in the therapy room.

Kearny (2010) indicates that to critique and understand the construction of knowledge allows therapists to make conscious the “hegemonic discourses that serve to regulate people, particularly those who deviate from the norms created by such discourses.” (Das Nair & Hansen, 2011 pp. 140).

One such deviation has arisen for the me within practice and time has been spent deliberating around the topic brought up by  my client, Gianni.  Gianni is an early-thirties professional cisgender male presenting in the therapy room with an array of topics – however, a reoccurring narrative that presented in sessions consisted of living in a polyamorous relationship with his partner.

The relationship, as described by Gianni, constitutes of a master relationship between the two and ascribes to a heteronormative stance. They contracted their relationship in such a manner as to call theirs a ‘primary’ relationship which they had spent a eighteen months cultivating before exploring the idea of secondary and tertiary relationships and at the time of therapeutic input, this exploration was in it’s infancy. The evaluation of what it means to be in a polyamorous relationship, it’s practical and impractical elements and the power imbalances inherent within the relationship were topics brought to the fore within the therapeutic encounter.

The experience of working with Gianni and exploring the topics presented by him opened me to a wider discourse, which will be explored further.

Sex and sexuality
Sexual identity and practices are embedded in wider social contexts and have implications for processes of moral, legal and medical regulations & economic, social and cultural formations (Weeks, 1986). Polyamory, can briefly be defined as the act of engaging in multiple relationships which may be emotionally/sexually close in nature (Barker, 2005) and as one such identity can be viewed as means for individuals to achieve both emotional and sexual fulfilment, deviating from the governing supposition of the natural order of monogamy. It can be argued that fulfilment in these contexts lead to higher positive psychological wellbeing (La Guardia, Ryan, Couchman & Deci, 2000.) However, such a discourse is relatively new in mainstream psychology and relationship therapy (Crowe & Ridley, 2000).

Recent revolutions in western identities of relationships have opened the doors to the discussions of egalitarianism and democratisation of relationships as a microcosm of wider western lifestyles, which focus on autonomy and personal goal fulfilment. The prevailing ideology of ‘finding the one’ and being happy ever after in monogamy seems at odds with the aforementioned idea of autonomy and a cursory glance at rising rates of divorce and separation (65%), as well as rates of hidden infidelity in marriage (60-70%) give credence to this (Vangelisti & Gerstenberger, 2004).

Monogamy also subsumes power dynamics defined by patriarchy: appropriation, relational and social. Conversely, polyamory is a potentially liberating, cooperative and empowering alternative to the ownership located within monogamy (Mint, 2010). However, this is not always the case as an ethnographic study by Sheff (2005) found a reoccurring theme of the women in the relationship garnering and retaining perceived power in the relationship, which was strengthened if they were the ones to initiate the actions of the polyamorous relationship. Directly as a result of this change in power dynamic, participants in the study went on to claim they perceived and in some cases experienced jealousy from their partners due to the inherent power shift away from the societal norm. The study went on to confirm this when quoting one participant:

“The women seem to have more of a sexual parlance because the women decide whether sex is available and there are still some incredibly conventional notions about who approaches whom. The men seem to swing between being very sort of kid in a candy store […] And the other extreme is feeling very dour about the fact that their woman is participating in this and really uncertain if they want to have that…” (Sheff, 2005 pp. 271)

However, this seems to become more diminutive as boundaries are discussed between partners involved. These boundaries included not seeing someone more than once; not having sex in the mutual home; including or not including the non-participating partner in dyadic sex with another and writing contracts. 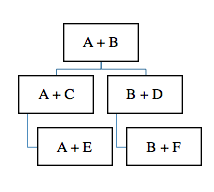 Secondly, there were triads and quads, with three or four people involved in the same relationship unit.

And thirdly, there was the V-structure, which held one member of the relationship in equal involvement with two others who had no interaction.

Reflections on working with Gianni.
Trying to understand this aspect of Gianni’s life initially seemed like a complex mountain I would need to climb in order to begin to understand. I had no resistance to the concept of polyamory nor the beliefs that prevailed within the discussion between Gianni and myself; however, the lack of experience in knowing the topic was a disadvantage.

It was through further study and understanding that the aforementioned ideas – relationship structures, power dynamics, jealousy and contracts between partners – I could understand the topic in a broader spectrum, which in turn allowed for a closer therapeutic bond between Gianni and I to unfold.

During the discussions about the relationship and the dynamic between Gianni and his partner, it appeared that after three sessions of intense talk about their relationship he acknowledged a feeling of jealousy that had been at the edge of his awareness. He was able to hone in on this feeling, and was offered the opportunity to discuss the root of it.

Initally, I thought this feeling of jealousy occurred due to an idea of enviousness or possessiveness that permeates through relationships, via patriarchal norms – however, as the information in the session developed my later understanding this was not the case – and the feeling of jealousy was primarily caused by Gianni’s feeling of less egalitarianism that he initially thought he would receive in looking for other heterosexual polyamorous partners of the opposite sex.

Gianni was not led in any way by me and this thread of thought was through his own conceptualisation. Gianni came to the understanding that he would need to work harder in order to satisfy his own sexual desires and firmly held the belief that he was able to be in greater control of his own sexual destiny.

References
Barker, M. (2005). This is my partner and this is my… partner’s partner: Constructing a polyamourous identity in a monogamous world. Journal of Constructivist Psychology 18(1): 75-88.

Kearney, A. (2010). Class and counselling. In C. Lago and B. Smith (Eds.) Anti-discriminatory Practice in Counselling & Psychotherapy: Professional Skills for Counsellors. London: Sage.

Vangelisti, A. L., & Gerstenberger, M. (2004). Communication and marital infidelity. The state of affairs: Explorations in infidelity and commitment, 59-78.